The Polish Association Condemn The Burning Of Their National Flag 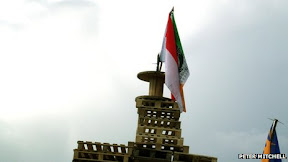 Maciek Bator of the association said: "The Polish community embrace and respect all traditions here in Northern Ireland but we find this behaviour totally appalling and offensive."The Polish flag is a symbol of freedom, independence and peace for the 30,000 Polish people living in Northern Ireland and around 80 million across the globe."By burning the Polish flag and other symbols, some members of the local communities were able to express their strong political views and promote anti-Polish sentiments"For many participants, especially the youth and young people, the burning of the Polish flag could become a clear signal to expand hate to other aspects of life."There is already a high level of hate motivated incidents on members of the Polish community. We call on all political and community leaders in Northern Ireland to take urgent action to stop hatred and bigotry."Alliance Party MLA Anna Lo has described those who burnt Polish flags on bonfires as "bigots"."It is completely unacceptable for people to burn any flag. The people who burnt these Polish flags are nothing more than bigots. It is the actions of a hateful person who would do such a thing," she said."I would urge community leaders to encourage the people involved in the building of these bonfires to ensure that nothing like a flag or an effigy is placed on them."This is clearly racist behaviour which is doing the image of Northern Ireland a lot of damage."A spokesperson for Belfast City Council said: "We are aware of the issue and it will be raised as part of our regular evaluation of the bonfire programme."
Posted by hoboroad at 12:45